In China, at the Jiahu archaeological site in Henan Province (near the yellow river), thirty 9000 year old bone flutes have been found, and at least one of them is still playable. These flutes are made from the 8" wing bones of cranes.

One of the oldest known flutes ever found is a 45,000 year old flute, consisting of fragments made from bear bones. 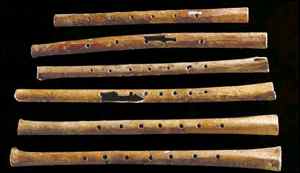 
Exit to the Museum

What do you think?